I recently went to Israel for the first time.  In a series of upcoming posts I will be sharing the story of what led me to go and stories about my trip.  In the mean time, I wanted to share about my visit to a museum while there.  When I was in Israel three holidays occurred, the first was Holocaust Memorial Day.  I had a few moments outside of the museum to write down a few words.  I wrote the following on social media:

We just visited the Yad Vashem, the Holocaust History Museum.  I process through writing, I would have loved more time to write, but only had a few minutes.  A few of my thoughts:

I wish I had time to really process the feelings and thoughts about what I just witnessed. I am so thankful there was light at the end of the tunnel. There was hope. Walking through at times, I just felt like I needed a hug because of the emotions overwhelming my heart and soul. The display of the shoes drew me in. Where had the feet that fit in those shoes walked before these evil events took place? What was the person like? I saw only saw beautiful faces. They were like you and me.
People who did nothing wrong and yet it was their shoes staring at me. It made me so mad that people who claimed to be Christians took part in this, putting fear into the lives of these people, creating a great chasm. And yet here I stood, seeing this in Israel, where G-d invited me to be, learning about His people, His land, and bridging the gap in some small way. I am blessed to do that, because these are G-d’s chosen people. I am blessed to do that because they persevered, fought, and held on despite the copious amount of loss, despite what they went through. What strength my Jewish friends have. I saw a picture of a young man, he was skin and bones, barely clothed, but he survived. At first I didn’t think it was a full smile, but after looking again, it was, his eyes were gleaming. I wanted to know his story. I may never know that, but I know he taught me about survival, about joy even in sorrow. Never forget. 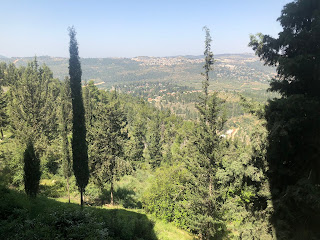 There were various parts to the museum.  At the main building, which was like a tunnel, you entered one end and went through rooms that told the horrific tribulations of the Jewish people, however towards the end it told stories of how so many survived, how so many fought.  When you exited the exhibit after a very dark story, this is a picture of what you see. This was the light a the end of the tunnel.  Hope is expectation, hope is an optimistic outlook, hope is what you saw, and hope is what you see throughout Israel and in the faces of the Jewish people.
Posted by shelly at 9:41 PM