Three different holidays occurred while I was in Israel.  One of those was Yom Hazikaron or Memorial Day.  It is Israel's official remembrance day dedicated to fallen soldiers and has been extended to civilian victims of terrorism.  It is a national day of remembrance. Places close, ceremonies are held, candles are lit, and flags lowered to half staff.

In Israel the new day begins at sunset.  The start of this day of remembrance began with a siren heard throughout the land that lasted for one minute.  In this one minute everything stops, cars driving on highways, people walking, it all ceases and the people stand in silence commemorating lives lost.  This one minute was followed by a service where stories where told about the lives of soldiers who were being remembered, names and pictures were shared of many who gave their lives for their country. These services were held all over the country.

The next morning cemeteries were filled with people attending ceremonies and gathering around the graves of soldiers.   A two minute siren was heard throughout the land and again everything stops, everyone stands, and silence is given as the nation mourns together for the many lives lost in service and terrorism.  There were songs, prayers, and tears of remembrance. 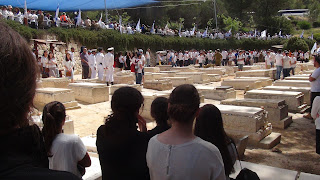 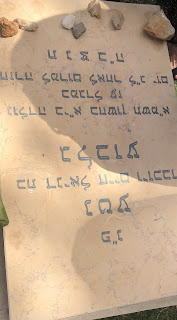 Stones are seen on the graves, placed there by friends, family, and visitors. These stones, according to Jewish tradition, are about much more than just marking a visit. I witnessed stones being placed as the country collectively cried for the sacrifices made.

While solemn, observing this day along side my Jewish friends in Israel, was beautiful to behold.  Israel honors these men and women on Memorial Day so much better than we do in America.

Today my daughter asked what Memorial Day was about, I explained.  Her response, "then why is everyone BBQing and going to the beach?"

I confess my lack of commemorating Memorial Day and
for that I am sorry.  To Israel, I say thank you for showing me the error of my ways.  To my daughter, your wisdom is inspiring.

This morning, I was blessed to attend church with my grandfather. The entire service was dedicated to honoring Memorial Day.  There was no siren, but there was a moment of silence.  There were songs, prayers, and stories of lives willing to sacrifice. There were no stones, but there was remembrance.  I was filled with pride that this small church got it right.

Today let us not make this day about mattress sales, food, and beaches.  Today may we remember  those who sacrificed their lives. May we learn from Israel and mourn together. Maybe in lieu of flowers, we place stones that will not wither, stones of remembrance.   The pastor this morning stated each life "gave up two lives, they one they lived and the one they would have."  This giving up was so you and I may live in the land of the free.

Memorial Day
Remembering those who made the ultimate sacrifice