​I am looking forward to watching your new show.  I do not want to rush summer, but September can not get here soon enough!!  Who doesn't want a daily dose of HCJ??  I know it is going to be great. I have an excellent idea for it,  but before I share that thought, I would  like to share a few things with you.

​I am a huge fan!!! I don't recall the exact moment I became a fan, it must have been about the time “When Harry Met Sally”.  I liked you even more when you made “Hope Floats” and then you came into the lives of my friends “Will and Grace”.  Tales about dolphins helped too!

​But....it was when I attended my first concert that I became an even bigger fan.  It was a Christmas concert.   I was about 6 months pregnant, the night started out rough, but when you and your band took the stage it was worth every minute.   I was mesmerized.  My second concert was “Oh My Nola” and my favorite song became “Yes We Can Can”.  The way you performed it, the motivational lyrics, the insrutments, and the notes all came together perfectly.  I love to blast that one in the swagger wagon, AKA, my minivan.  My third concert was a surprise.  I was given clues and had to guess each week, starting 13 weeks in advance.  I knew by clue 4 it had somehting to do with you, but I had already checked tour dates and wasn't sure how this was going to work.   Clue 6, confirmed it was you.  The clue was:  “You are correct in you assesment that the person at this event is also a musicain. In fact their first album was released the year you were born.”  I knew it was you!!! This concert was a blast.   You even played a few new tunes from your upcompoing album, which quickly became my favioite album.   Just a few months later I attended my fourth concert. I posted on social media: I love to write and read words, they help me process, but as Hans Christian Anderson says “Where words fail, music speaks.”  I loved hearing the music speak that night.

​I love getting to see you perform, but I also love getting to see those gentlemen on stage with you perform.  The amazing Mr. Lucien Barbarin dueling it out on stage with you, there are no words. The talent of Mr. Jerry Weldon.  Mr. Jonahtan Dubose Jr. just about brings me to tears.  Hearing the talent God blessed him with is an honor.  When y'all played “How Great Thou Art” at the last concert I attended, my heart just about burst.   I purchased albums from Jonathan Dubose Jr., thanks to you sharing the stage with him.  And lets not forget the talent of Geoff Burke, Augie Haas, Dion Tucker, Neil Caine, and every other amazing muscian that gets on that stage.  I wish I could name every one of the them!!  The  language y'all speak on stage is captivating.  I love hearing how the puzzle pieces of each musician and each note fit together.   It is a language that speaks to people.

​During my last HCJ concert you talked about your show.  You stated, you would be interviewing ordianary women.  The other day my husband surprised me with a trip to New Orleans and I thought this would make a great segment on the Harry show!!!  I have only been to New Orleans once, briefly.  We stopped for dinner on our way home from the beach...with our kids.  I loved the archticure, the history, the talented saxophone player I met on the street, but I struggled with really getting to take it all in because we had our kids.  I told my husband for our 15th wedding anniversay I would like to go back without our kids. At the end of June we are!!  Wouldn't it be a great segment to have you personally be the tour guide of a mega fan? This Mr. Harry Connick Jr., is my excellent idea!   I would loved to see Musciain's Village and tour the Ellis Marsalis Center!!!  I would love to know the name of every band member as well!

​Even if you can't be our tour guide for a few hours, could you at least give us a list of things we shoud see and do?  Is anyone playing in New Orleans we should make sure we see??​​

I even got my fan club card in the mail yesterday! 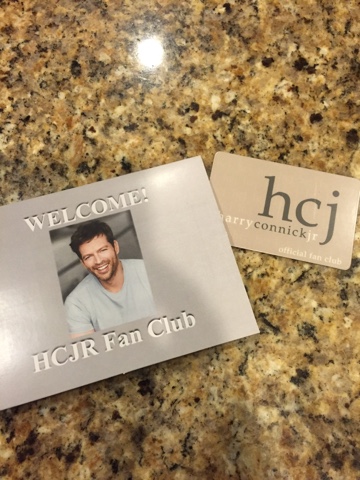 Posted by shelly at 6:39 PM No comments: