Is Israel safe?  I asked this exact question before I knew I would ever go to Israel.  The answer I received from Rabbi Dov Lipman was, "Israel is more safe than the USA. We live very free lives without fear. It's an incredible feeling."  I could barely wrap my head around this statement.  How is Israel safe?  Israel is surrounded by people that hate the country and hate the Jewish people.  Yet, he is telling me it is safe.  Not only did I pose this question, I have heard it asked many times and the answer is always yes, Israel is safe.


When the Lord laid it on my heart to say yes to going, I sought out the answer to this question again from Rabbi Dov Lipman and he stated, "Israel is more safe than any place".  I emailed my friend Josh Hasten as well, his response, "I honestly feel safer here than in any major US city. 100%."  I also frequently asked my pastor Trey Graham this question and his response was yes every time.

Since traveling to Israel, I am now the one being asked, is Israel safe?

I researched news in Israel during the time frame I was there and found nothing notable.  Yet, in my own country at least 5 crimes took place.

Now yes, Israel was dealing with and continues to deal with issues with those surrounding her borders, but inside those borders it is safe. 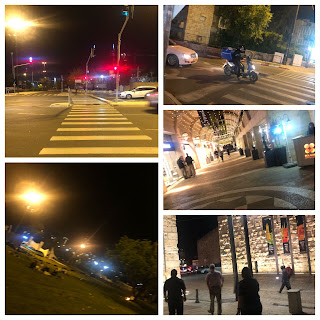 In the evenings after a long, incredible day of
touring my pastor would say "you wanna take a walk?" Whoever said yes would then proceed to walk from our hotel to the Western Wall, which was 2.5 miles.  The first evening I took a walk, we took a different route and it was much longer than 2.5 miles. It was beautiful. We observed the normalcy of Israel and not the sensationalized news of Israel we see in the US news. We saw a pizza delivery driver, a gorgeous park with people spending time together, and we walked through an outdoor mall. 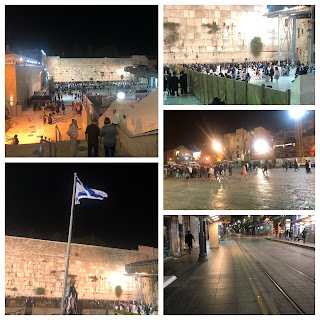 These pictures show the Western Wall. It is an amazing place. The bottom picture depicts a street we walked down on our way back to our hotel. On this very street Trey Graham stated "This is the scary place your friends and family warned you about." In fact it was so scary, I was blessed with a free water and a free juice from two different Arab store owners. 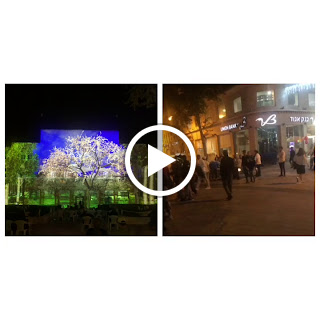 The picture and video seen here was on another walk to the wall.  We stopped at a movie that was playing and witnessed a group of young people blasting music, dancing, and being together in the streets of Jerusalem.